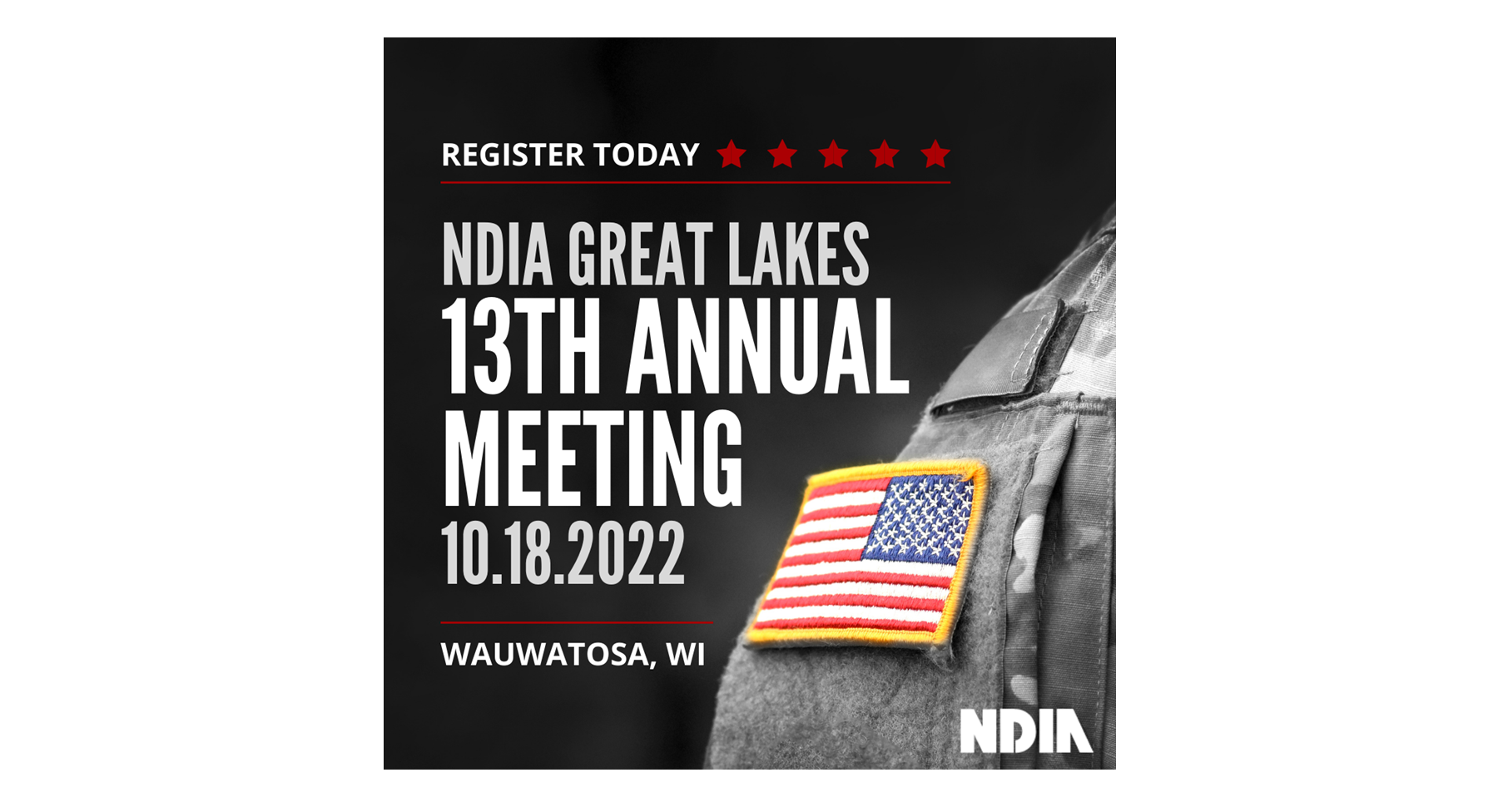 NDIA Great Lakes Chapter invites you to join us at our 13th Annual Meeting to be held in Wauwatosa, WI (Milwaukee).

Attendees will have the opportunity to engage directly with Army Futures Command leadership and likeminded peers from industry-both from large and small businesses. The Army is currently undertaking the largest modernization effort of armored vehicles in the past 40 years. The Next Generation Combat Vehicles (NGCV) Cross Functional Team (CFT) is driving this effort and is actively seeking new ideas from industry, academia, and beyond. NGCV CFT is looking for innovative solutions that will support the Army’s NGCV using contracting methods to include SBIRs (Small Business Innovation Research) and OTAs (other transaction authority).

Brigadier General Geoffrey A. Norman is a native of Boulder, Colorado, and a graduate of the United States Military Academy at West Point, Class of 1994. He is currently assigned as director of the Next Generation Combat Vehicles Cross-Functional Team at the Detroit (Mich.) Arsenal. The NGCV CFT is charged with leading the Army’s #2 modernization priority to develop and field future ground combat platforms.

BG Norman’s assignments outside the operational force include service in Project Warrior as an Observer/Controller on the Cobra Team at the National Training Center Fort Irwin, CA and Armor Officers’ Advanced Course Small Group Instructor at Fort Knox, KY; G-3 for the U.S. Army Maneuver Center of Excellence at Fort Benning, Georgia; Division Chief for Soldier, Maneuver and Robotics in Headquarters, Department of the Army G-8, Force Development at the Pentagon, Washington D.C.; and ACofS G-3/5/7 and Director of Systems Integration for Army Futures Command in Austin, TX.

BG Norman is a graduate of the Armor Officer Basic and Advanced Courses, and the Cavalry Leader’s Course; the United States Army Command and Staff Services School and Command and General Staff College; the Joint Forces Staff College; and the Army War College. He holds Masters of Arts degrees in Management and Leadership and Strategic Studies.

He is married to Dr. Stephanie Norman, a neonatal nurse practitioner, and they have two sons – William and Benjamin. Colonel Rachel A. McCaffrey is the Vice President of Membership and Chapters for the National Defense Industrial Association (NDIA) and the Executive Director of Women in Defense (WID).

Rachel came to NDIA and WID after more than 28 years in the Air Force. In her last assignment, she led an Air Staff Division responsible for planning and programming Command and Control and Global Intelligence, Surveillance and Reconnaissance (ISR). Prior to her Air Staff tour, Rachel served as the Assistant Chief of Staff, Intelligence for the North Atlantic Treaty Organization’s Air Command at Ramstein Air Base, Germany. During her NATO tour, Rachel led the ISR Division for Operation UNIFIED PROTECTOR where she oversaw more than 70 personnel who planned, executed, and evaluated ISR operations. Rachel also commanded the 9th Intelligence Squadron at Beale AFB and is a fully qualified Joint Specialty Officer, serving on the Joint Staff in the Intelligence Directorate.

A native New Englander, Rachel grew up in Central Massachusetts. In 1988, she graduated from the University of Notre Dame with a Bachelor of Arts degree in English, and received her commission through the Reserve Officer Training Corps. She earned her Master’s Degree in English Language and Literature from the University of Maryland, College Park. Rachel also attended the Intelligence Weapons Instructor Course, Squadron Officer School, Air Command and Staff College, and Army War College.